The Meaning and Importance of Sugar Skulls

Día de Muertos, or Day of the Dead, is a holiday I’ve witnessed and lived my entire life. At first, it was only a day off elementary school, and either the previous day or the next one, there would be a school festival where we would read our “literary calaveras”: satirical poems in which the author writes about Death coming to the world of the living to take someone to the land of the dead. Each classroom would make an altar or “ofrenda” for a Mexican celebrity, with everyone contributing the different elements it contains, and then the altars would be displayed outside each classroom to commemorate all the people who had contributed to our culture in one way or another.

As the years went by, some parts of the celebration remained (such as the making of an altar for a Mexican or Latin American celebrity), while some others were taken away (it eventually stopped being a day off school) and some others were added. When I grew older, we started going to the cemetery each November 2nd—the day we celebrate Día de Muertos in my hometown—or the following Saturday to spend some quality family time gathered around the tombstones of relatives who had passed on. It was here that I started noticing the small sugar skulls some people would lay on the tombstones of their loved ones. 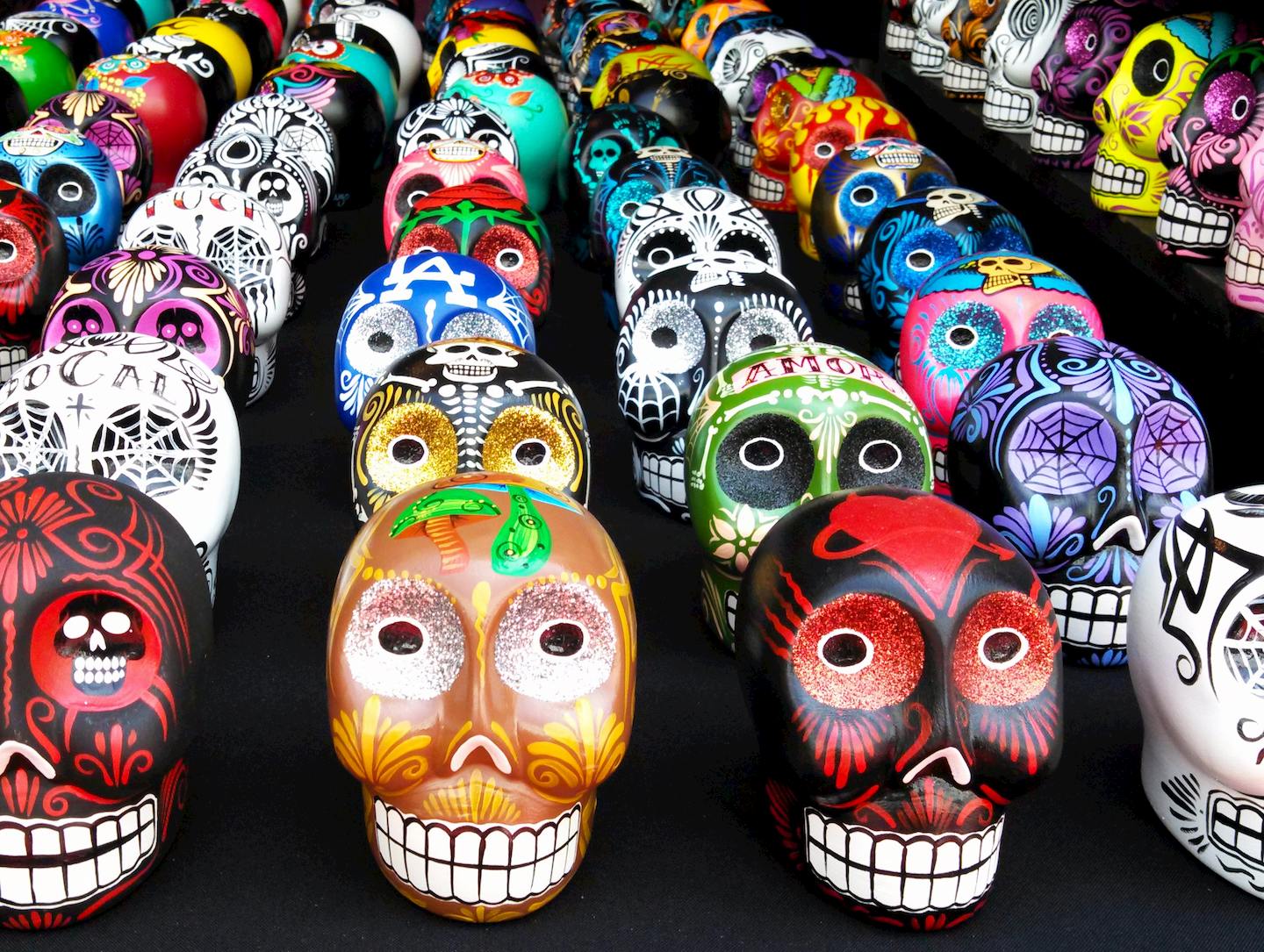 Sugar skulls are an incredibly important part of an altar, but I found it strange that, of all the decorations we put up in an ofrenda, the sugar skullswere the one that people took to the cemetery, too. I figured it was the easiest one to carry and also the one that lasts the most in the elements. I didn’t think too much of it, and it wasn’t until years later that I took a moment to question this fact that had been part of my life for such a long time.

I was in college in Mexico City, and to get to school, I always had to walk by these vendor stands on my way to the subway. Soon enough, I started noticing some of these vendors start putting out sugar (and chocolate) skulls of all sizes on their displays: from skulls so small that I could carry at least five of them in my hand, to skulls so big that they were encased in plastic transparent boxes to facilitate carrying them. My first thought was that Día de Muertos was right around the corner, and my second thought was that I could buy some sugar and chocolate skulls to take to my aunt, whom I was going to visit during the weekend before Día de Muertos.

Seeing these sugar skulls displayed throughout all the vendor stands in the city made me pause for a moment. Throughout school, I had been taught of the meanings of the various offerings in a Day of the Dead altar. I knew why we put up papel picado, why we made a trail of petals of cempasúchil flowers (also known as Mexican marigolds), why we would add the favorite foods and drinks of the people the altar was made for, but the sugar skulls always seemed only decoration to me. As I mentioned before, I had never stopped to think about why they were such an indispensable element of an ofrenda. It seems a bit morbid to display skulls in an altar, even if those skulls are small, made of sugar, and edible, as well as quite tasty! Why would the offerings in an altar include these sugar skulls?

The Origin of Sugar Skulls

The reason goes all the way back to prehistoric times, when the skull was a predominant figure in Mesoamerican societies and cultures in various aspects and depictions. One of these depictions was the tzompantli, a wooden rack in which the skulls of war prisoners or human sacrifices were displayed. These civilizations believed in a spiritual life after death, and so these skulls were an offering to the god of the underworld, Mictlantecuhtli, who would assure a safe passage into the land he ruled. The tzompantli could also be an altar illustrating this journey from the terrestrial life into the spiritual one, and it’s not uncommon to find sugar skulls that are decorated and colored with Mictlantecuhtli’s face!

With the arrival of the Spanish conquerors and their religion, these traditions were lost, and yet a part of them was kept alive by maintaining the figure of the skull in a sweet confection that we can place in our altars as part of our offerings to the deceased.

These sugar skulls are made from a paste called alfeñique, which is a mixture of sugar, hot water, and lemon—among other ingredients—that creates a moldable mass akin to caramel. This paste allows for artisans to mold it into the shape of a skull to later decorate it for display. Of course, depending on where you see these sugar skulls, you’ll find that a lot of them are made with neither alfeñique nor chocolate. While these sweet skulls are found all over Mexico, some states prefer to make these confections with other ingredients, such as almonds, honey (and covered with peanuts), amaranth (which is kind of like little balls of grain compressed into different shaped), and even gummies! The reason they come in different sizes, besides decoration purposes, is because small skulls are usually meant to represent children, while the bigger skulls represent adults and elders.

The Colorfulness of Sugar Skulls

Now, why are these somehow endearing skulls decorated with little icing details instead of just being the mold of the skull? Is it only so that they look cute instead of creepy? No, not exactly. Everything about Día de Muertos is bright and colorful, especially the decorations. If we’re going to add small sugar skulls to an altar, these sugar skulls should be decorated with bright icing and shiny colored foil to simulate orange hair and red eyes and a giant white smile.

The reason a holiday revolving around death is so full of color instead of being gloomy and gray is because we celebrate the lives led by those who are now gone. It’s not simply a day about mourning our loved ones and telling stories of them around their tombstones in the cemetery and our altars; it’s a day about remembering their lives and the impact they had upon us, as well as keeping in mind that just because they’re no longer with us doesn’t mean that they’re entirely gone, because we keep them alive in our hearts and memories. 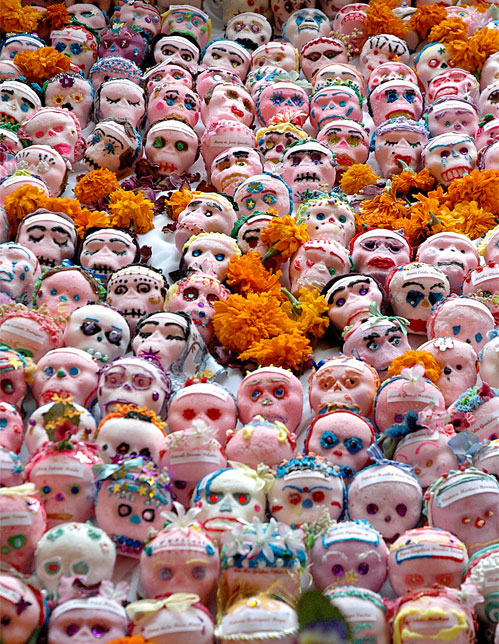 Of course, sugar skulls can be decorated in all kinds of colors, but when people paint their faces as if they were sugar skulls themselves, the colors they use hold a special meaning. Red is used to represent our blood; orange to represent the sun; yellow to represent the Mexican marigold (which represents death itself); purple is pain (though in other cultures, it could also be richness and royalty); pink and white are hope, purity, and celebration; and finally, black represents the Land of the Dead. 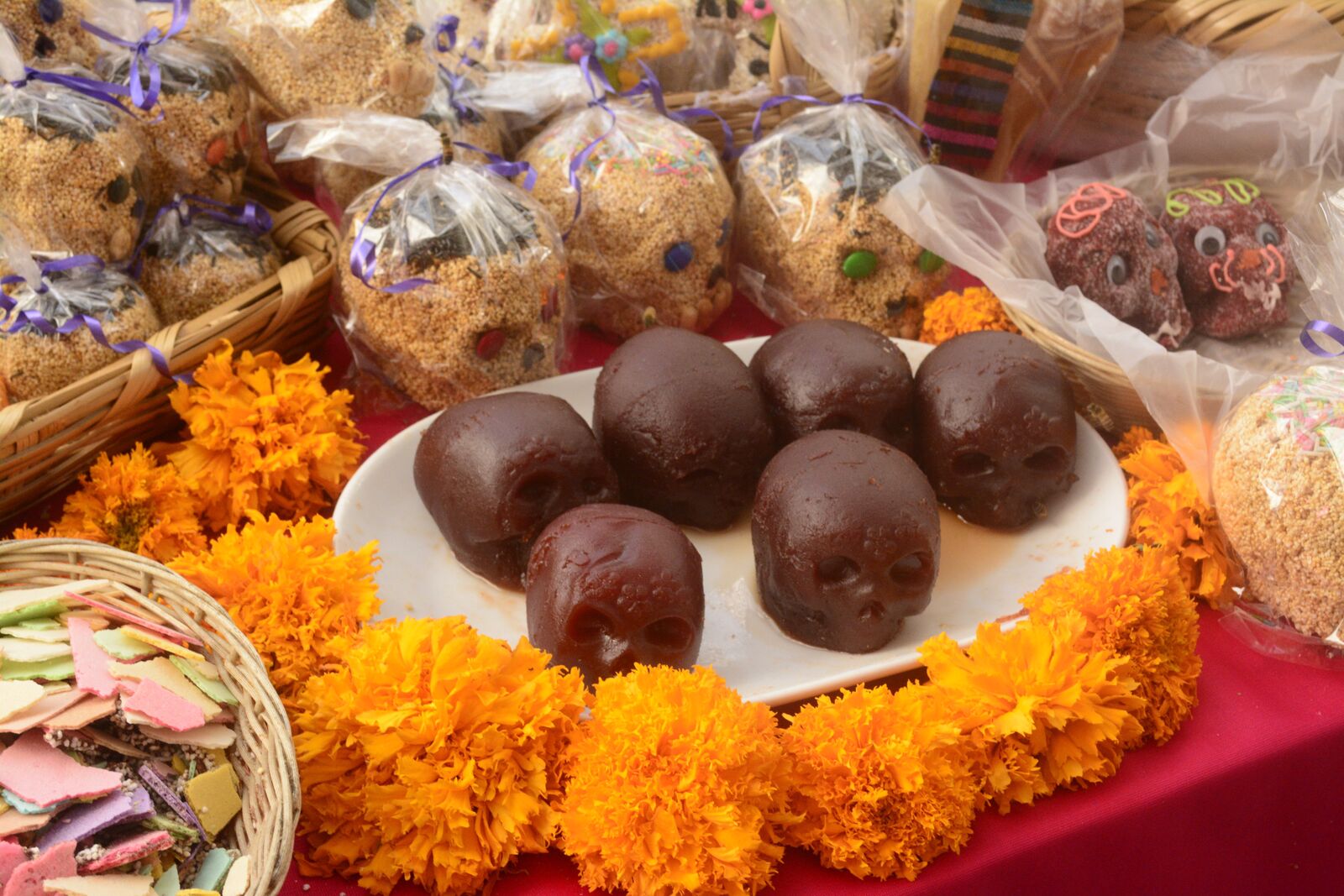 Why Do Some Sugar Skulls Have Names Written on Them?

As I mentioned before, I spent my first Día de Muertos away from home with my aunt. That Friday, when I arrived at her place, she was setting up an altar of her own in the living room, rearranging boxes to act as shelves that would later be covered with a blanket or a tablecloth. She was putting up pictures of our deceased loved ones, leaving empty spaces to put their favorite drinks and dishes (closer to November 2nd so they wouldn’t go spoiled or rotten), and placing a lot of sugar skulls of different sizes throughout the ofrenda. It was the first time I saw an altar with pictures of my family members, since we usually don’t make an altar at home, and once again, these sugar skulls were what stood out to me, especially since some of them had a name written on them.

I had never seen these types of sugar skulls before, and so I asked my aunt why she had picked her sugar skulls with names rather than just general sugar skulls. She said that when you place a sugar skull with the name of someone who’s passed on in your altar, you’re honoring the memory of that person, just as you are with the rest of your offerings. 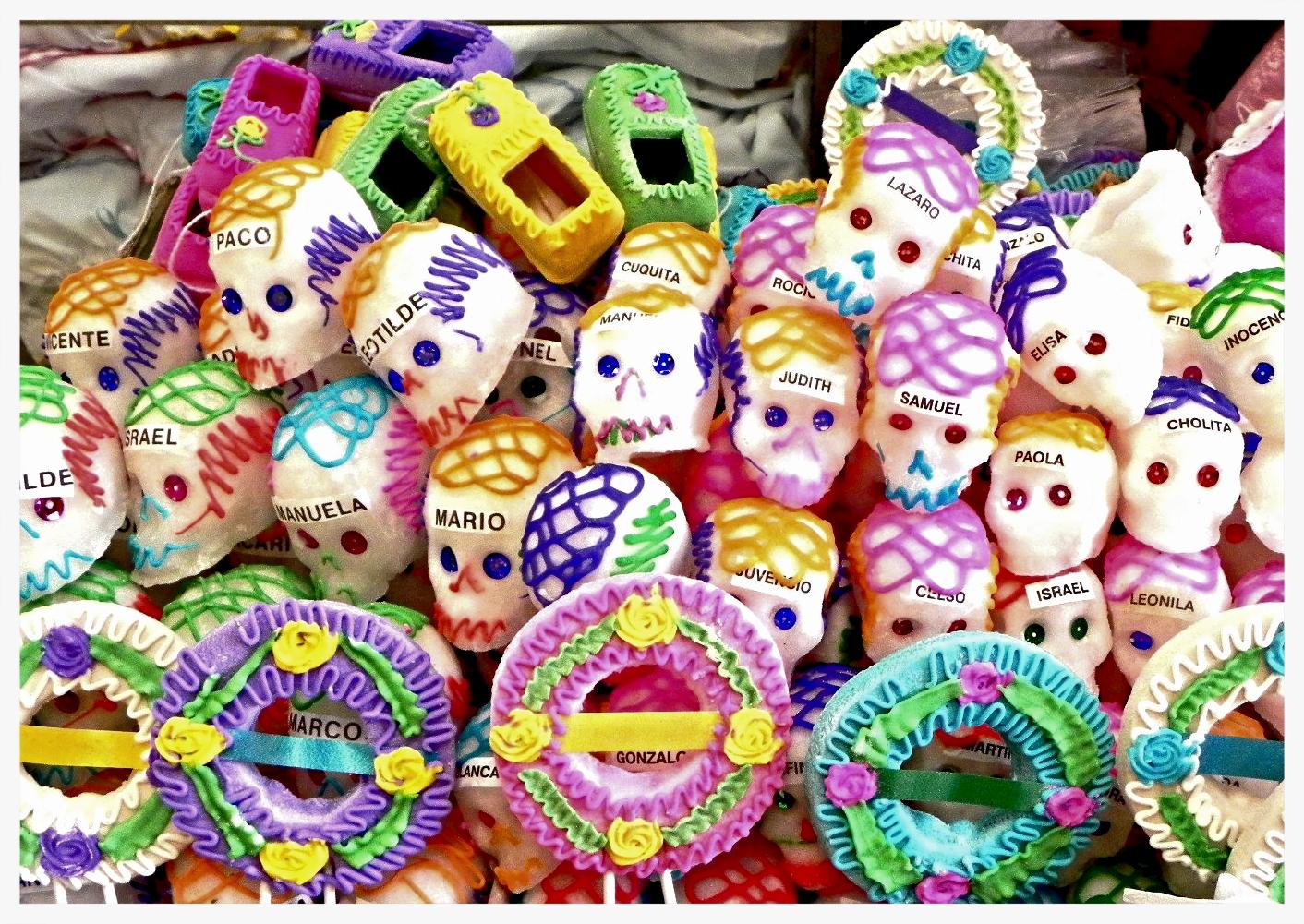 Giving someone who’s still alive, whether they’re a friend or a family member, a sugar skull with their name on it is also a regular custom around Día de Muertos. Some might find it strange, or they might think it’s some sort of prank—after all, why would you give someone a sugar skull with their name on it if those are common part of an ofrenda? It’s because that person is meaningful to you, and so you’re reserving a spot for them in the underworld once they’ve gone on to the life after death. Besides, death is the only thing that’s certain in this life, so don’t be offended if someone ever gives you a sugar skull with your name written on it. They’re not planning anything, they’re just thinking about saving you a spot in the next life!

The tradition for you

If you’re thinking about putting up an altar for your loved ones who are unfortunately no longer with us (don’t worry, it’s not only for Latin Americans!), don’t forget to add those sugar skulls to commemorate them! And don’t be afraid to add some sugar skulls with the names of people who are still alive and whom you care about. Día de Muertos is a celebration of life, and what better way to celebrate it than bringing together those of us who remain here and those who are kicking it up in the spiritual life?