The History of Day of the Dead 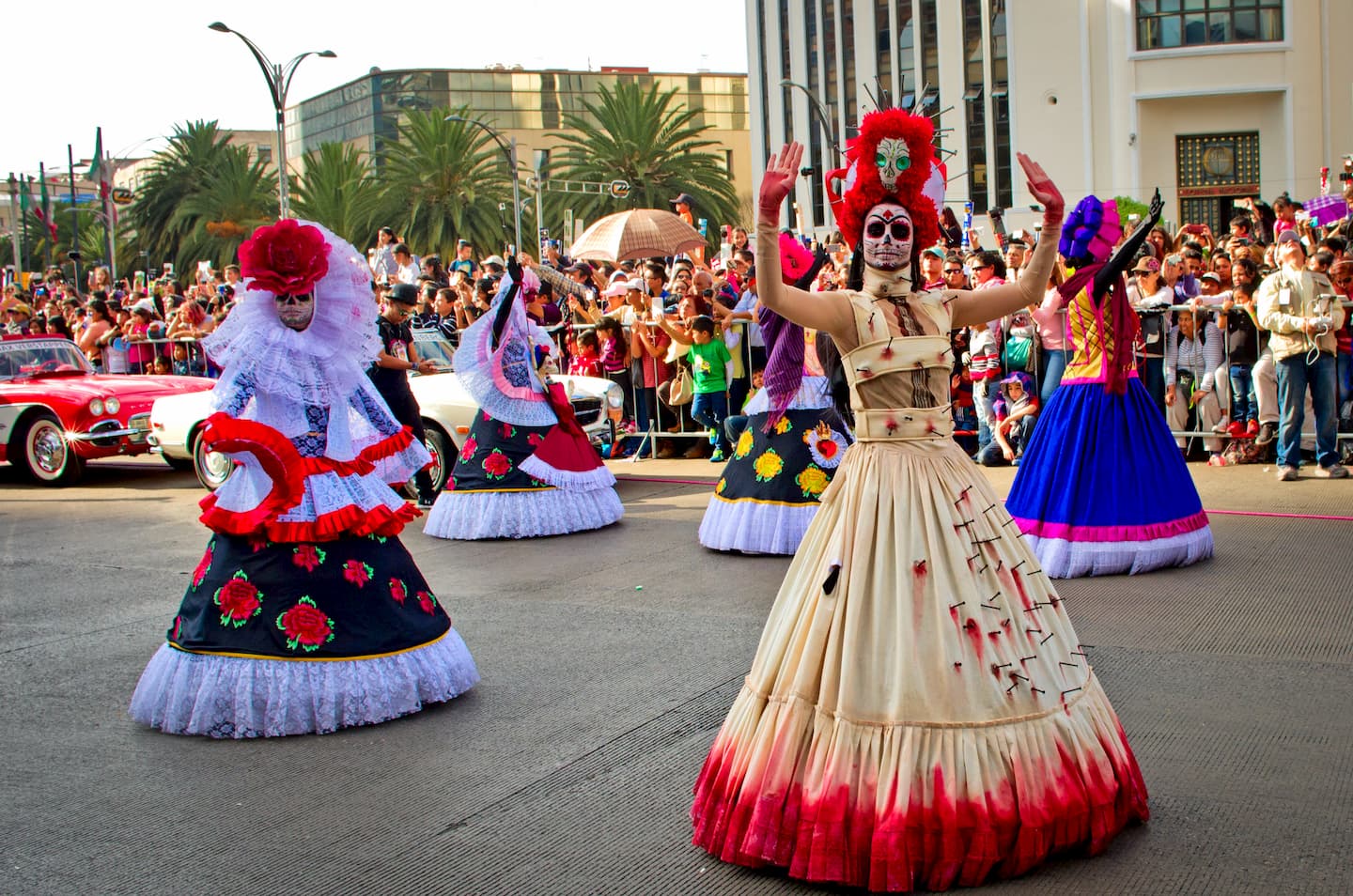 What Is Day of the Dead

Here in the USA, we mourn our loved ones when they pass with funeral services and wearing dark solemn clothing. It’s usually a sad time in our families when we have to say goodbye to grandpa forever. Different cultures grieve and treat death differently with traditions that have been around for centuries.

One culture that has created a unique and interesting way to face death and the deceased is Mexico. Mexico is colorful, noisy, and lots of fun. The people, the food, and the celebrations are bright, loud, and unequaled. So when it comes to death, in true Mexican style, Mexicans celebrate with color, food, and music.

Day of the Dead is a 2-day celebration where it is believed that the passageway between the real world and the spirit world is open so our deceased loved ones can come back to visit us. What do we do when grandpa comes back from the land of the dead? We make his favorite meal and we offer him his favorite drink. We sing, dance, and rejoice before he heads back to the underworld for another year.

When Is Day of the Dead

Day of the Dead is celebrated on November 1st and 2nd. It is sometimes confused with Halloween because of the symbolic skulls but is not related at all.

It is said that on November 1st the children who have passed come back to visit and celebrate as angelitos and on the following day, November 2nd, it’s the adults (Difuntos) turn to show up for the festivities.

Family members prepare for several weeks in advance for the tradition by creating altars, decorating burial sites, and cooking specific Day of the Dead food. 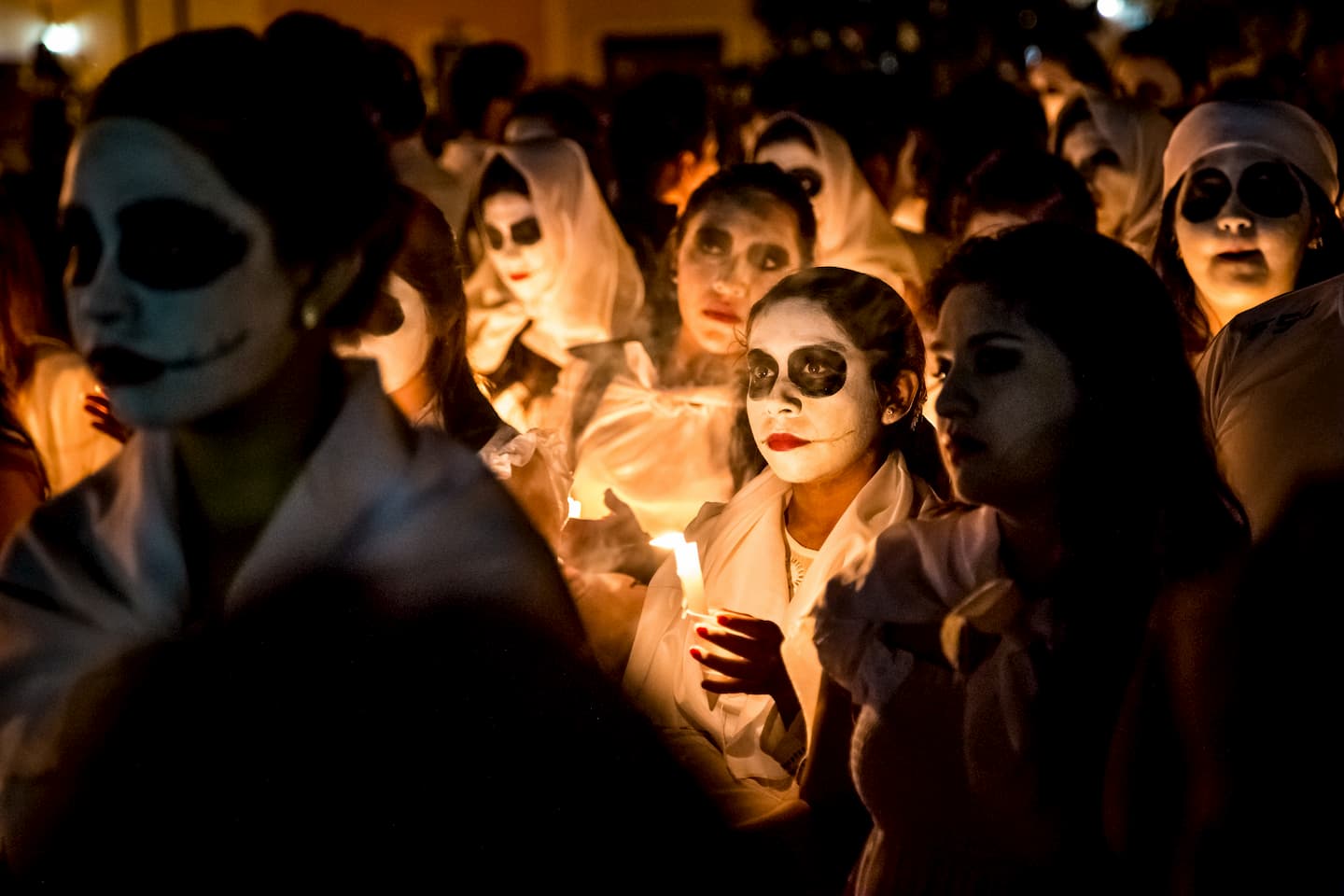 When the Spaniards came to Mexico and introduced Catholicism to the indigenous people they blended traditions and beliefs to create their own customs.

Dia de Muertos came to be from a mixture of the Aztec festival dedicated to the goddess, Mictecacihuatl, with the Catholic influence. Mictecacihuatl is the “lady of the dead” and it is said that she watches over the bones of the dead and swallows the stars during the day.

The church rejected the Aztec’s beliefs and turned it into All Saints’ Day and All Souls’ Day making it on 2 days to fall into the catholic calendar. Mexicans have since transformed it into a truly unique holiday that they honor every year.

Today’s customs regarding Day of the Dead festivities have morphed over the years to become the distinct tradition it is now. Flowers, altars, food, and music are all integral parts of the holiday.

Families will gather during the night at the cemeteries (panteons), light candles, and place flowers on the burial sites of their lost loved ones. There is festive music and definitely no crying or grieving. This is a reflective and lively get-together honoring the deceased back to celebrate life and enjoy all the human things again. 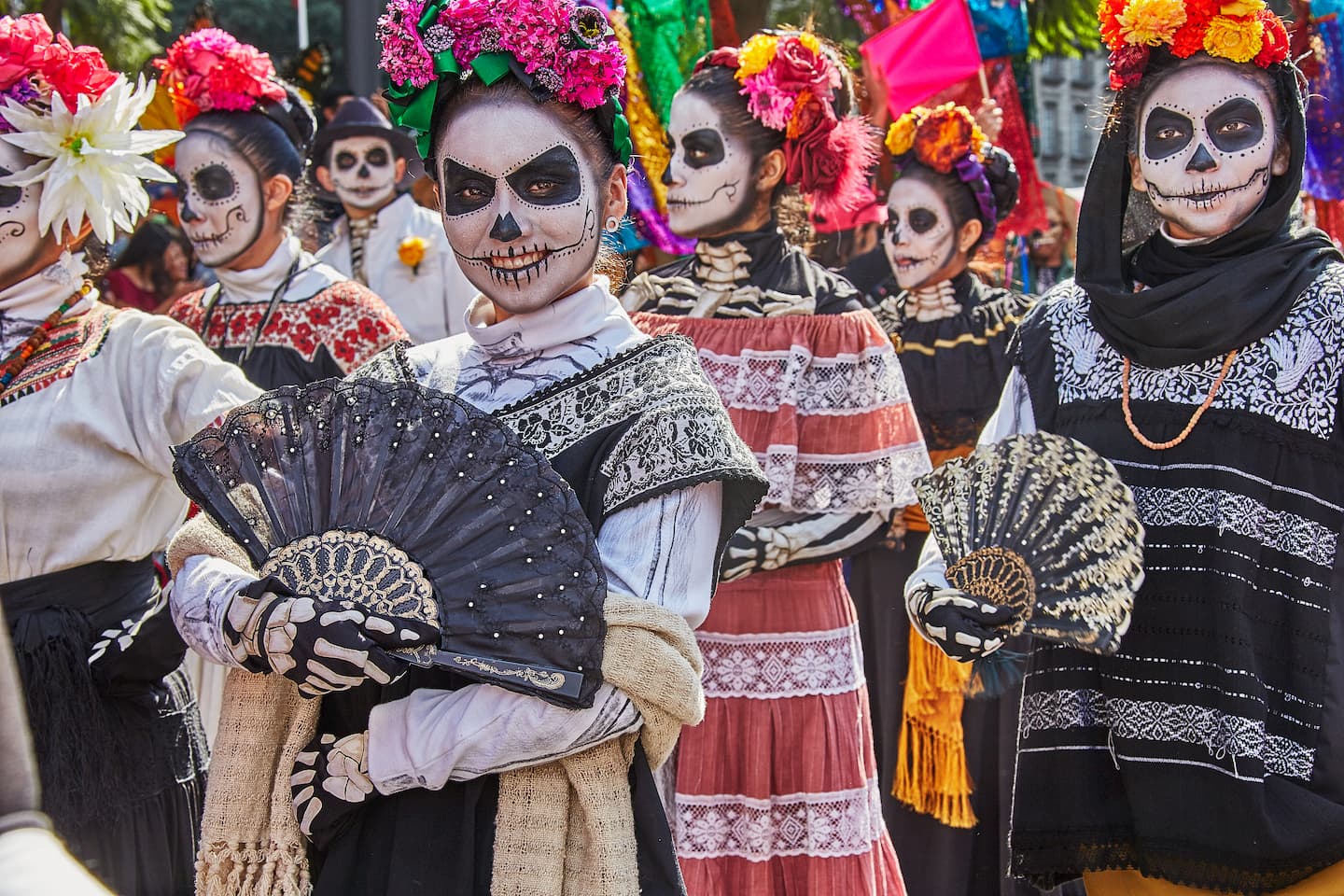 The traditions surrounding Day of the Dead are rich with cultural influence and true to Mexican style they don’t lack color and substance.

The Aztecs used to offer water and food to the deceased to help them on their journey to the land of the dead. Now, Mexican families set up beautifully decorated altars in their homes and place photos of the loved ones they have lost along with other items.

The ofrendas usually consist of water, the loved one’s favorite food and drink items, flowers, bread, and other things that celebrate the dead person’s life.

Marigolds are used during Dia de Muertos celebrations by being placed on the altars and on the burial sites. The Marigold flower is thought to guide the spirits back with their intense color and pungent smell.

Skulls are a huge part of the holiday. Skulls were used during rituals in the Aztec era and passed on as trophies during battles.

Today, during Dia de Los Muertos, small decorated sugar skulls are placed on the altars. There is nothing grim about these skulls. They are decorated with colorful edible paint, glitter, beads, and sport huge smiles.

The skulls (calaveras) and skeletons (calacas) that are so prominent in today’s festivities came about at the beginning of the 19th century when cartoonist and social activist José Guadalupe Posada drew La Catrina to protest the Mexican people’s desire to look more European. La Catrina has become one of the biggest symbols of Day of the Dead with people painting their faces with skulls and flowers.

Papel picado means perforated paper and is an integral part of Mexican culture. The art comes from the Aztec tradition of chiseling spirit figures on wood. It is used during Day of the Dead celebrations by stringing them on the altars and in the streets. Ofrendas showcase fire, water, earth, and air. Papel picados represent air on the altar.

Mexico knows food! There is no celebrating without food in Mexico. Customary foods are prepared during the Dia de Los Muertos and are shared with family, neighbors, strangers, and the visiting spirits.

Pan de Muertos, or day of the dead bread, is an essential part of the festivities and is also placed on the altars. Sugar Skulls are enjoyed by the young and old during this time also. Mole, tamales, pozole, and sopa azteca are prepared by families with the recipes being passed on from generation to generation.

Countries That Celebrate Day of the Dead

Mexico is not the only country that celebrates Day of the Dead. Many other Latin countries like Columbia, Ecuador, Honduras, El Salvador, Nicaragua, Peru, and Venezuela all have their distinct ways of welcoming back their passed loved ones. Some not as colorful and festive as the Mexican version, but still a spiritual time for families to get together and reflect.

Traditions and customs vary per country, but the base beliefs remain the same. Even in Mexico, the customs vary depending on the area in Mexico. Day of the Dead tends to be celebrated more elaborately in Central and Southern Mexico.

All Souls Day is celebrated in parts of Europe but is nowhere near the equivalent of the festive celebrations of Day of the Dead in Mexico.

How You Can Celebrate Day of the Dead

You can celebrate Day of the Dead in the USA respectfully by understanding the customs and honoring the tradition for what it is.

“There is absolutely nothing wrong with wanting to celebrate The Day of the Dead in the US. Most Mexicans enjoy the fact that you are interested in their culture and want to get to know their traditions. If you choose to celebrate Day of the Dead, make sure you understand the event and its traditional practices before partaking in the festivities.”

Day of the Dead in Mexico is no small event. It has been celebrated for centuries and has recently gained popularity outside of Mexico. The holiday is a great way to honor and remember our loved ones who have passed.

The preparations leading up to the event are important and deeply rooted in Mexican culture. For Mexicans, this is a deeply spiritual and family-bonding experience.

Once a year we can eat and drink with the ones that are no longer with us. What a great way to commemorate the people we love and miss.